Note: The original report was written by Guo Cheng (Chinese) and Rizwangul (Uighur) ，Translated by Uighurian from Chinese into English. The article is an official report of the mandatory name change campaign in the region which was deleted on February 27, immediately after it was published by Qiemou ling gong li 《wechat public platform》 and <daily news> in Chinese on February 26. This mandatory name change campaign caused a Chaos among the Uighurs live abroad.Most critics say it’s a  sign that China is openly imposing its racist policy of wiping out the entire Uighur nation and is accelerating the speed of compulsory assimilation of Uighur people into majority Han Chinese. 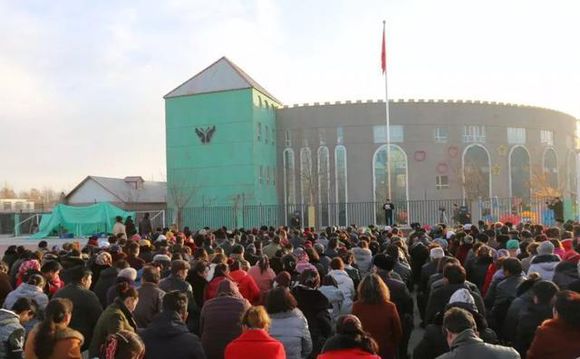 At the beginning of 2017, Ba Hongwei took the initiative to register and came to the community of Gul Kowruk and participated the “visiting people and benefiting people and gathering with people ” movement and served as the first party secretary of the community and the leader of the work group.
For more than a year, he has been depicting a new picture of “Beautiful Community” in the new era, leading the group of nine people with a persistent, persevering, and hard work spirit.He supplemented shortcomings strengthened the foundations, eliminated the cracks and tightly held iron hoops, and implemented a number of effective measures to promote stability and development in the community.
In his work, Ba Hongwei adhered to the principle of strengthening political solidarity as the first requirement for party members and cadres, and successively carried out a campaign of “clarify the party member identity and clarify the ideology ,establish an image of service “,”The voice of thanking  the party sounds from Gul Kowruk community and Took the lead in sounding swords, indicating attitudes, motivating and guiding Party members and cadres and residents of all ethnic groups to respond actively.
“Xinjiang is China’s anti-terrorism, anti-infiltration and anti-secession frontier and the main battlefield. The fight between separatism and anti-separatism is a long-term, complex, acute, and sometimes even fierce battle. There is a Chinese saying “Sturdy grass withstands high winds; true gold stands the test of fire”.
Faced with a special political test, would we raise a flag and take charge before the attack, or follow the flow of people and wait in silence? This is a political test that every cadre must write. It is a touchstone to test whether our political skills, national emotion, the standard of truth, moral integrity math or not our accountability in all works”, said Bahongwei.
In order to guide the residents and increase their sense of gratitude awareness for the party and create a good atmosphere of patriotism education, Ba Hongwei directed  production of more than 100 pieces of exhibition boards on the basis of using the flip charts of regional party propaganda departments political slogans of “ love the motherland ,thank the party ,listen to the party and follow the party ,Highlighting patriotism, the party’s glorious history, the 90th anniversary of the founding of the military, and the development goals of Cherchen (qiemou)county and the workgroups’s implementation of the “eight tasks”, etc. established patriotism education bases in the community and  normalised the political  education  for the residents .
As a Uyghur cadre who has been educated by the party for many years and as a party member for 27 years, Ba Hongwei always believed that without the Chinese Communist Party and the great motherland, there would be no today’s development and prosperity for Uyghur people and there would be no happy life for Uyghur people. Not even my personal growth and progress. In the face of the test of struggle against separatism, Uighur cadres must never forget their own “roots” and “souls,” that is, to stand firmly on the party’s position, stand firmly on the people’s position, and fight resolutely against “three evil forces” and “two-faced people” and keep the character of “Vanguard Warrior” forever.
With the continuous promotion of the introduction of new names for newborns and the use of new-period terminology campaign, ethnic minority residents in the Gul Kowruk community named their newborns in their own family with new terms that are consistent with the characteristics of the new era. This campaign reflects the eager pursuit of advocating a new era and advocating new ideas.
In the report titled  “The report on using new names in the new era “ which  he submitted to the Party Committee Organizational Department of the Korla prefecture, Ba Hongwei wrote with affection: “as a leading cadre of the Party, who have been educated by the party ,and the first party secretary of the grass-roots community, I am determined to take the initiative to stand up.
With my own practical actions and political positions, political attitudes and political positions, I use the new name that meets the requirements of the new era to take the lead in setting standards, educating and influencing the residents around us to use new names that are consistent with the characteristics of the new era…”
The oath of Bahangwei followed by a good round of applause of 578 people .”Secretary Ba, Secretary Ba, we support you “people shouted.
A retired old cadre in the village named Tursun Abduweli said:“we all support the secretary bahongwei’s name change behavior, a few days ago, my grandson in the first grade discussed with his father to change his name to Fu Quan, all family members supported him as well”.
The party branch secretary of the community Wu Ya Guang said :
“It is admirable that he had changed his name, which he has been called for several decades, to “Bahongwei “ , a name with the meaning of clear-cut era. In the future, we will guide the residents and all the cadres of our community to learn from Comrade  Ba Hongwei. He is our role Model.”
“My first identity is being a Communist Party member .my first responsibility is to work for the Party. My first goal is to lead the people of all ethnic groups to a happy life. I will continue to firmly establish ‘four consciousnesses’ and resolutely regard the overall goal as the framework of my all work. I measure conscientiously the effectiveness of all work, based on the results of social stability and anti-separatist struggle, harmony, stability, and unity.
I spare no effort to ensure the stability and I connect the masses to the party with all my heart.I will  interpret my loyalty to the party and  people by my words and deeds.”
In the face of everyone’s approval, Ba Hongwei said firmly.
Share 0
Tweet